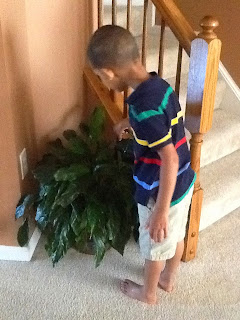 Bubs was busy busy with a lot of practical life today.  I asked him this morning what he was excited to work on today and out of the blue he said ironing.  I was like, "ironing?".  He was like yeah.  I want to iron my clothes on my hook (the ones from Mass that I make him hang there because they aren't dirty).    Gotta try to cut laundry down somehow! 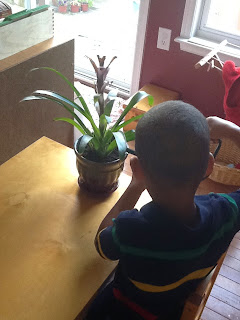 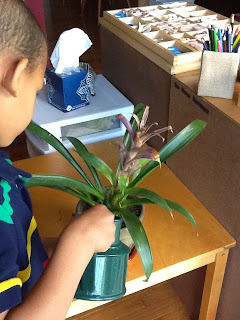 Here Bubs is watering this desperate plant.  So sad to see it hanging on for life!!
He went to water the plants, inside and outside while I was getting the ironing board set up.  We have a few sad pots of herbs along with a few flowers on the deck.  My husband says that our house is the plant hospice!  I can kill a plant pretty quick.  (See that sad little plant above?!)

It was absolutely hilarious to watch him water the plants on the deck.  If you remember my post on Parts of the flower, we have a bumblebee issue on our deck.  There are about 2 or 3 that like to buzz around and then collide into each other and scatter in different directions,  it makes for quite the "enjoyable" time outside.  Soo....let me setup the visual for you.  Our deck is only like 15 x 15 at most and we have a circular table with four chairs. Then I had a drying rack out there which didn't allow for much room to move around. So Bubs got his watering can and ran out onto the deck and went around the drying rack to reach the pots.  Well, then I hear him screaming, "shoo shoo" in a high pitched voice!  Then I see water spraying all over the deck and then him screaming, "ah ah!!" Then he runs inside and only part of one pot is even watered.  We were all laughing so hard at him, even T-man (the baby).  Bubs said so sternly and with such a serious face, "I'm not going out there again to water any more plants."  It was so hard to keep a straight face at this point.  I told him he needed to at least try to finish watering and then he could come back inside.  So then he convinced Nito to go out there with him (as if two people out there on the deck would scare the bumblebees away).  Nito said no way, but Bubs told him he could help water.  What toddler doesn't love a chance to use water?!  Well after all the drama, the plants finally got watered, no children or bumblebees were injured.  However, Bubs did give a good swing toward one of the bees with his watering can and I thought for sure that bee was coming back for him. 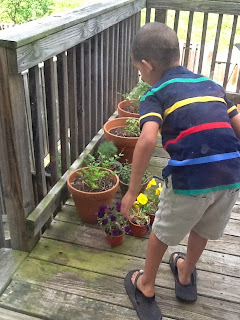 Btw....if you are wondering why he is wearing a different shirt, I will sadly admit that it was laundry day and he didn't have anymore uniform shirts.  This was as close as we could get.  In the ironing pics, he finally had some clean by then. 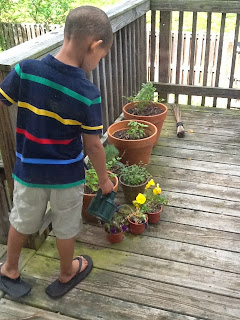 Sadly, I don't have any pictures of him "shooing" the bumble bee away with his watering can.....


Phew....then he moved on to ironing.  Teaching them young ya know.  If he doesn't become a priest one day, some lady will be quite lucky to get this little boy of all trades!  Ok so he chose some shirts from upstairs off of his hook and we began. 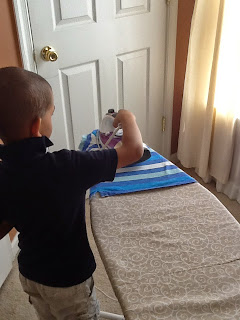 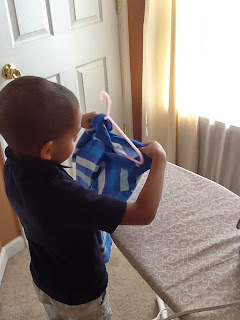 Don't mind the pink hanger (ok let's call it salmon).  He wouldn't choose a different one!
﻿ 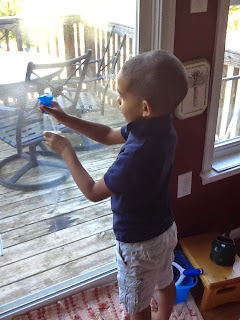 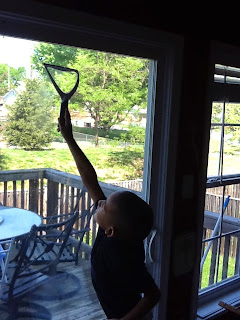 Window washing was the next activity.  Bubs likes to reach the highest part of the window available.  So of course the stepstool allows him that extra reeeeach. 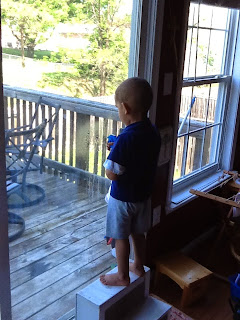 And of course, look who is following his big brother around.  Actually this scene did not end so well.  Bubs had taken a break to go to the bathroom when Nito saw his chance and swooped in.  Ahhh, if only we had audio to accommodate this picture.  On another note, Nito is quite excited that he can spray the water from the bottle and he can open it to refill it.  Now if only I could get him to use the squeegee instead of having a puddle of water at the bottom of the window on my hardwood floor.
Posted by Our Lady of Good Counsel at 10:04 PM