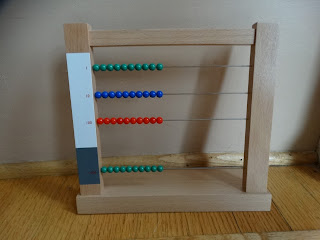 This presentation seemed to get passed by with my older three kids, but I sat down and purchased the ACTUAL small bead frame for T-Man and the other 3 siblings after him.  I was on a tighter budget back then and had more pressing materials to buy rather than a small bead frame.  I mean, we have the large one, so can't we just use that?!  The short answer is yes, but the longer answer is no.  Clearly Maria Montessori created a smaller one for a purpose right?

The smaller frame introduces the child to addition, subtraction, and multiplication. 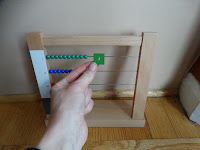 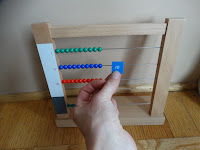 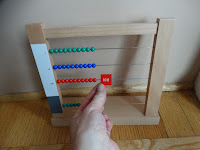 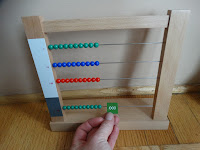 The first step in introducing this new material to the child is to compare the beads to the stamp game.  Hopefully the child has experience with the stamp game and would know this comparison.  Show the child that the green 1 unit tile from the stamp game is the same as 1 green unit bead on the frame.  Do this for all four categories.  This is where it is very helpful to have the small bead frame compared to the large one!  There is a lot less explaining about how the child would need to ignore the bottom few rows of beads since the large bead frame goes up to 1 million. 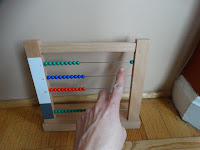 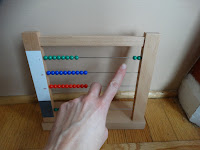 Now the child needs to know how many beads are on each line.  Count the beads, one at a time, while pushing them to the right. 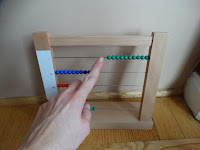 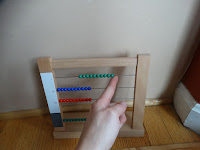 Then slide the 10 units back to the left and tell the child that 10 units is equal to 1 ten. 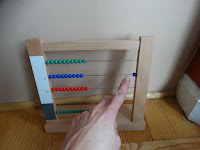 Now, push 1 ten to the right hand side.  Continue counting tens (1 ten, 2 tens, etc.) and exchange for a hundred bead.  Do the same through the thousands. 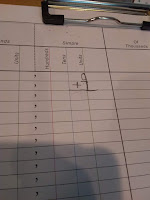 T-Man worked with static addition problems for a day or two before he quickly wanted to move along to dynamic addition.  Unfortunately, I didn't take pictures of his static addition.  For an example of static vs. dynamic, see this post from the stamp game.  Short story, static involves simple addition, while dynamic involved carrying of the numbers.

He started by writing his equation on his small bead frame paper.  His equation is 9+7. 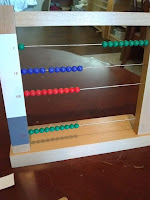 He moved 9 green (unit) beads to the right side of the frame. 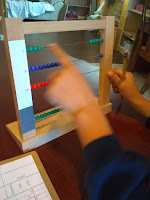 Then he started adding 7 to the 9 green beads.  He pushed 1 bead over and stopped because he was at 10.  Then he pushed all 10 green beads back to the left and then moved 1 blue (ten) bead to the right.  He went back up to the green beads and continued counting with 2, 3, etc. until he got to 7. 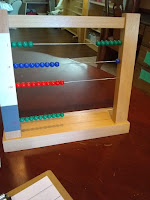 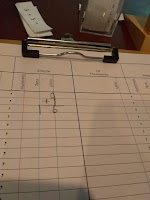 Here is what his answer looked like when he is done. 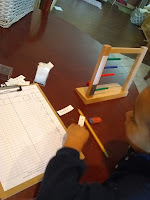 He worked for awhile. 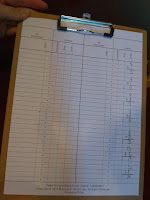 Here are more of his equations.  We will move on to larger equations in the next few weeks.  I'll try to update this post and add pictures.


Posted by Our Lady of Good Counsel at 3:00 PM No comments: 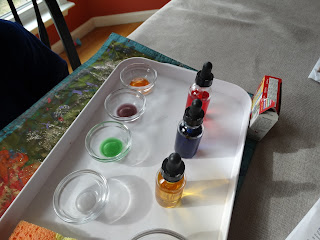 T-Man has been working with the color tablets lately.  I decided to let him experiment making secondary colors from the primary colors. 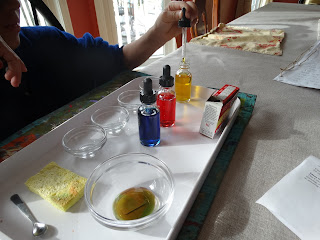 He started with putting a droppers worth of yellow dye in the small bowl. 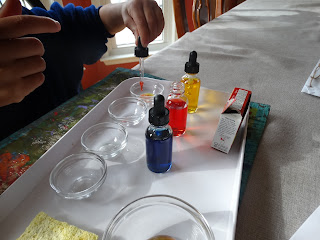 Then he added a dropper of red dye. 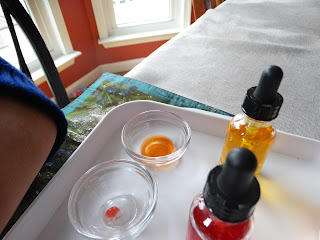 I think I took this picture before he stirred, but it will be orange. 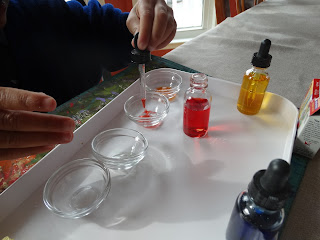 Next, he put a dropper of red dye in the second bowl to create another secondary color. 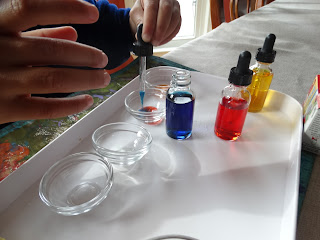 Then he added a dropper of blue to the red bowl. 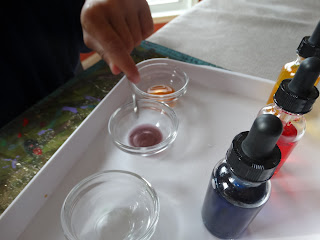 He took his handy dandy stirring spoon and discovered that he just made the color purple!  He giggled and was so excited. 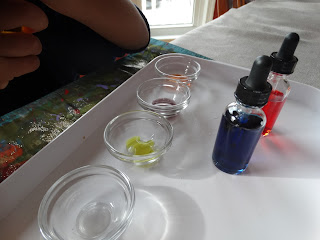 Now, he took a dropper of yellow in the third bowl. 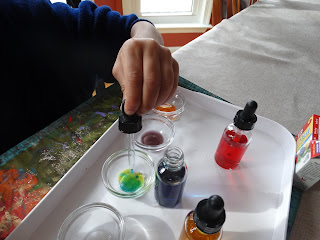 Added a dropper of blue. 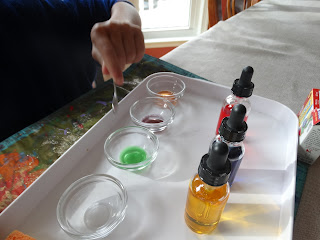 Here are the three secondary colors he made. 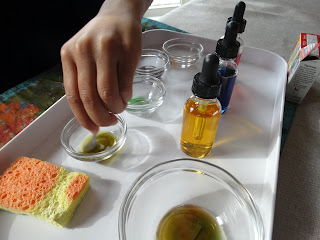 The fourth bowl is for experimenting.


Posted by Our Lady of Good Counsel at 1:55 PM No comments: