Well... we actually did it.  Started back with school in the middle of summer.  I mean, who does that really???
Our first day was a big success.  The kiddos were very enthusiastic to see the new materials on the shelf.  However, I did have to slow their roll and remind them that I would not be presenting anything new for a few weeks.  We are spending some time reviewing while I get Nito transitioned into the Primary "classroom".    He is quite the eager little fella and will make quite the student. 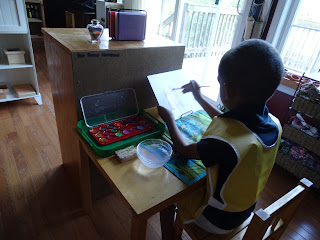 All summer long, Bubs has talked about how he was going to do the water and wine presentation, but the first thing he pulled off of the shelf was water colors! 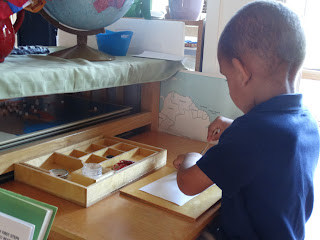 Nito went straight into gluing, because, what is more fun than getting your fingers all sticky and then touching all of the other materials? 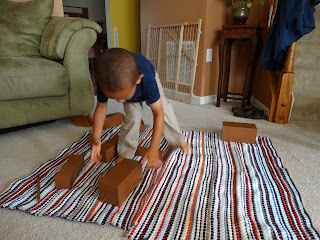 He did move on to more serious work like the brown stairs and dishwashing.  His first presentation went smoothly.  I was very impressed with his concentration level. 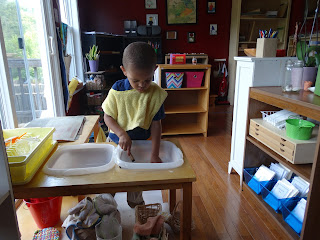 As you can see (sort of) in the background, I have rearranged the classroom since my last post.  I also have some empty shelves because new materials are in the mail.  Also, because T-man is around. 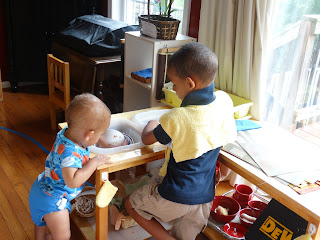 This is what the true classroom looks like when T-man is awake and on the prowl.  Bubs is being so patient with him while he is trying to do dishwashing.  T-man thinks it is like the bath tub and is splashing bubbles and water all over the floor!  Don't worry though, Nito is not too far behind with a towel to clean up the floor.  He actually enjoys doing it. 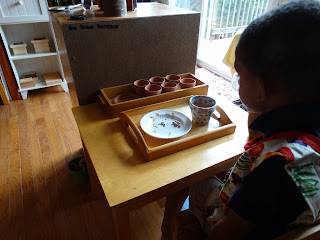 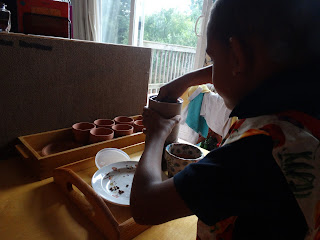 In the two pictures above, Bubs is planting fruit seeds.  The kids had this grand idea to plant cherry, lemon, and apple seeds and see what happens.  I'll keep you posted throughout the year to see if any seedlings pop up.  (You might have to check back in like 5 years to find out if any other them turned into an actual tree!!) 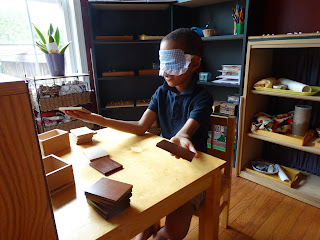 Bubs had quite the busy morning, moving from sensorial, to practical life, to language.  In the picture above, he is weighting the baric tablets.  He uses his fingertips to decide which is heavier.  He got them all right!  (I even struggled to get them right last year when I was "practicing".) 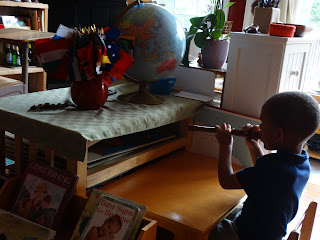 Nito ended the morning with his own rendition of "Twinkle twinkle" on the recorder.  It was veeery loud.  Thankfully T-man was awake from his nap.

By the way.....if you noticed, there were no pictures of Kui.  She was not feeling well today.  I'm sure there will be a lot from her coming soon :)
Posted by Our Lady of Good Counsel at 10:13 PM 2 comments:

Email ThisBlogThis!Share to TwitterShare to FacebookShare to Pinterest
Labels: General 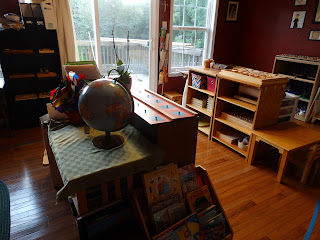 Well, it's about that time of year again.  We are working off of a year round calendar this year so we are getting started with school next week.  (Yikes!!!  I haven't made any of the materials that I dreamed of making yet.  Where did the summer go already??).

Before we start back this year, I did a little organization.  Of course..... I mean, what brings me more joy than reorganizing a room??  Oh wait.....tea and muffins. Ah.......  Ok back to the classroom.  I will attempt to describe a little about how our classroom is setup and how we will manage to "make it work" in one space.  Right now, I technically have four environments: Elementary, Primary, Toddler, and Nido (infants).  The Nido (not to be confused with my little guy Nito's nickname) is quite neglected along with the toddler (even though my training is in this area).  Nito is really working his way out of toddler and just dipping his toes into some sensorial and practical life material from primary.  This might make my environment a little more manageable with toddler materials put away.

We recently added a few more bookshelves to the environment and this has helped me to organize the materials more into categories than age levels.  It is not really ideal to have them intermixed, but it will have to work in our classroom for now.  Things might change as we add materials or as the children grow.  For instance, we now have a large bookshelf with all of the math materials.  I just put the primary materials on the lower shelves for Bubs to reach them and Kui can keep her racks and tubes and checkerboard beads higher away from Nito.  For someone who hasn't experienced it, there are ALOT of beads associated with racks and tubes and they roll very nicely on hardwood floor......right under all of the shelves.  Makes for cleaning up to be a challenge.  It's sort of like 52 card pickup with 4 times the beads!

Another nice element thrown into the mix is T-man.  He is now 11 months old and quite the destructive little fella.  He can make a room look like a tornado hit it in a matter of minutes!  It makes organizing the classroom quite interesting.  We may have to live with the bottom few shelves empty on each bookshelf until he moves away from being a shelf sweeper.  Not to mention that the smallest cube of the pink tower, the ones bead from the bead cabinet, and the small knobbed cylinders are all within his little grasp and make perfect choking hazards!  Good thing I have three little observant helpers to keep T-man alive during the school day.

I have added just a few pictures below of the classroom while I'm in the process of reorganizing.  The picture below is our bead cabinet and math shelf.  I still need to spiffy it up a bit, but it works for now.  My mom made Kui a quilted checkerboard and decimal checkerboard so they roll up nicely and are in the basket in the corner.  Helps save on space! 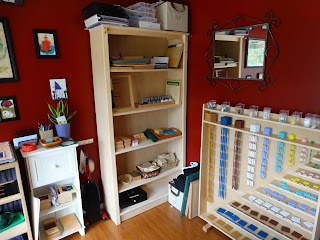 ﻿
This next picture has a lot going on due to the size of the materials along with the shelving that I have and the best use of it.  The fractions are sitting on the top and are as close to the math section as I can manage for now.  Then below on that shelf is some practical life materials along with a dishwashing basin and table washing to the left. 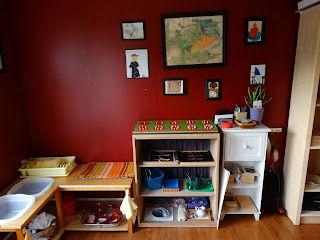 I will post more pictures as I get things organized.  The other side of the classroom looks like T-man just passed through so I won't be posting any pics of that.  It is the elementary side and has some exciting materials for him to explore, including beer bottles used for making different tone sounds!  Gotta love it when you look over and see your baby blowing in a beer bottle.  Oh the joys of homeschooling.  Priceless......﻿
Posted by Our Lady of Good Counsel at 9:52 PM No comments: