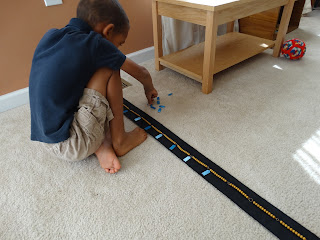 Well Bubs has made it to the 1,000 chain!  I really can't believe it.  He is really into counting and numbers these days.  When we are at Mass, he just opens the missal and starts counting the numbers in the Table of Contents!  He does seem to always point out to me the number 23.  He says, "Look Mommy that's how old you are!"  I have to remind my dear son that I am indeed not 23, but rather 32.  Clearly we have a little more work to do.
Anyway, back to the 1,000 chain.  Bubs was sailing through the teen board and ten board so I moved along and presented the 100 chain to him to see how he would do.  Well.....he did it correctly the next time he took it off of the shelf on his own, so I watched him do it one other time by himself and then moved him on.  But here is where the challenge began.  Now I had to get creative with this gigantic chain.  Where shall we do it?  Do we have enough work rugs?  How can I time this presentation to fit nicely into T-Man's nap time?  (I wouldn't want 1,000 beads rolling all over the hardwood because T-Man thought the chain makes a better necklace or toy than a material!  It was sort of a spur of the moment presentation because he was asking for something else so I winged it (which is never a good idea to do in primary since the child really needs that sense of order and all of the materials ready for him as opposed to the elementary child).  Nonetheless, I persevered and improvised.  Only my daughter knew that I was using the Black Strip from elementary as a work rug (Shhh!).  But hey, it worked perfectly!  When you are homeschooling on a budget, you really have to work with what you have.  That thing was collecting dust anyway.  (Until now, because my daughter saw it again and of course wants another presentation on it like yesterday.) 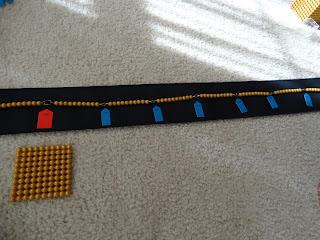 Bubs was placing a hundred square at every hundred beads. 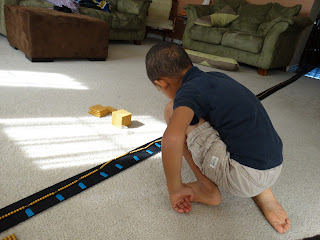 We managed to stretch the chain from the far end of the living room to halfway through the kitchen.  Thankfully T-Man slept the whole time. 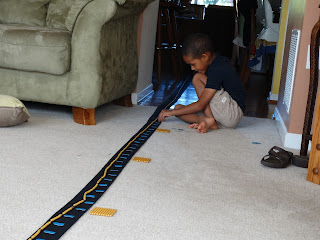 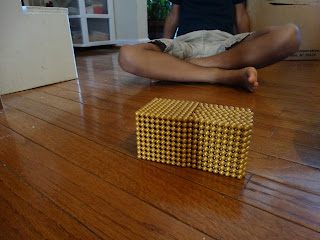 Then at the end, you can put the 10 hundred squares next to the 1,000 cube to show that there are 1,000 beads!  Voila!!
He did get it out the next day, but T-Man was awake so it was quite interesting to see how he managed to lay it out in the classroom.  He made it all the way to 700 before Nito had his way with it and messed up the labels.  Boy oh boy you can imagine how that went down........ 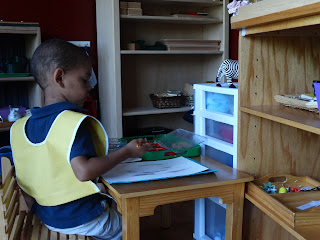 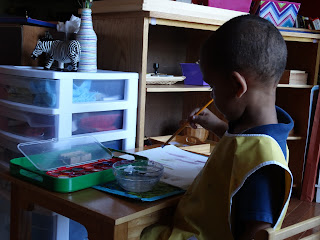 After several persistent requests, Nito was finally presented watercolors!  I was actually trying to hold off on this because I could just envision the disaster looming in the future especially with that loooong walk from the classroom to the bathroom sink to rinse out the water bowl.  However, he surprised me 100%.  I guess it is really true that you should follow the child.  He has consistently taken this off the shelf 5 more times and with each additional time, I can see his concentration level grow.  I believe he is feeling very happy that he can do the same work as his big brother, Bubs! 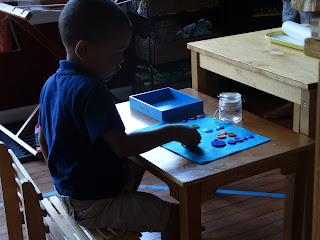 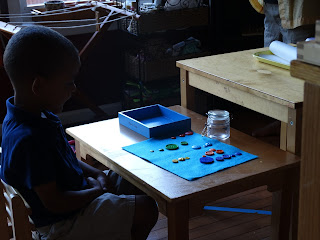 Here he is doing button sorting.  I had to get a little creative with some transition materials from toddler to primary.  I had moved all of those items off of the shelf for Bubs awhile ago and sort of transformed them into new works.  Nito really seems to enjoy this and right now he is just sorting by colors.  I did present it as a work for gradation of the sizes, but that will be a point of interest later on after he works with it for awhile.  I will say that Bubs likes to take it off the shelf and say, "Nito, this is how you are SUPPOSED to do it!"  Thankfully Nito doesn't think too much of it and just says, "Oh."  Phew.....hopefully his self-esteem isn't crushed (I probably do enough harm by myself without Bubs). 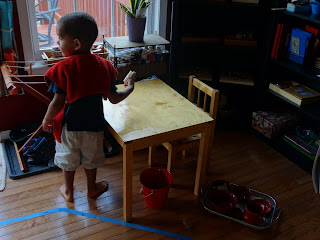 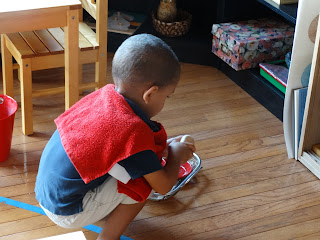 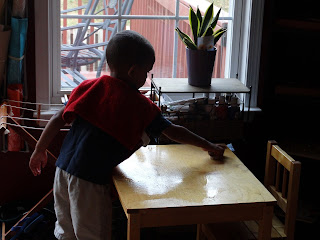 Good ole table washing.  He is getting better with this one.  Less water on the floor these days. 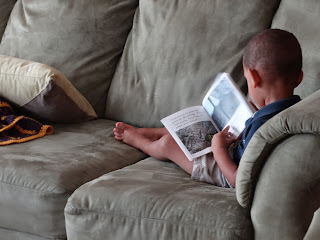 Oh, if only I could lounge on the couch and catch up with an old book!  He is very intently reading up on the energy from the sun.  I think he likes the pictures the best. 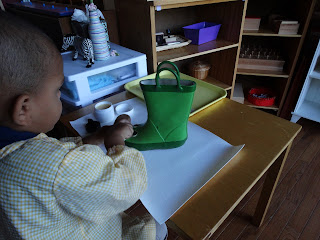 What is it about polishing that just peaks the interest of the boys in the house?  Whether it be brass, shoe, wood, it doesn't matter.  Polishing is the prized material in the classroom these days.  Let's just say that all of our boots, crucifixes, bells, wooden bowls, etc. should be quite clean at this point. 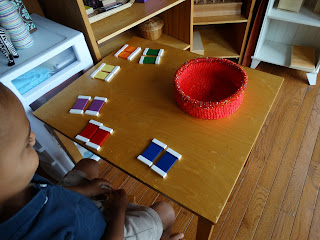 Ok so this set of materials is just ghetto!  When it comes to the color tablet boxes, I only have the second box out of the three.  Therefore, I had to become creative to see what color Nito knows.  So I took the closest looking tablets of a few colors from Bubs box.  Then I just threw them in a basket and presented a matching presentation to Nito.  It was great!  He loves it and actually knows all of these colors.  I will then add the brown, black, gray, etc.  Then he can just move on to the regular color tablet box where it involves the gradation of colors from lightest to darkest.  Hey, he's only two and doesn't know any better.  Thankfully Bubs hasn't mentioned it or maybe he doesn't realize these came from his box.  Oops.......well maybe he will discover that soon enough!