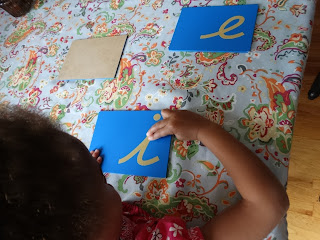 Mumbs starting sandpaper letters and she is doing so well!  I don't think I have ever managed to start a child at 3 yr. old when you are supposed to!  I can see a huge difference with her interest and attention to detail when she traces each letter.  She started with 3 vowels and after a week, she knows all three short sounds that the vowel makes. 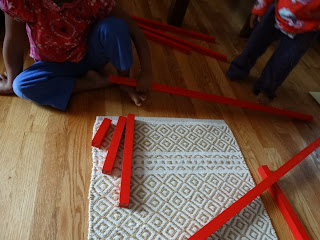 She has also been dabbling with the red rods.  As you can see in the background, the toddler is very excited to help her. 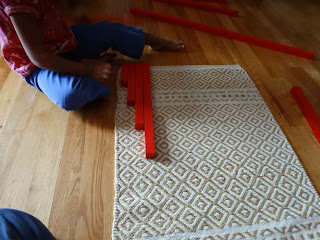 Progress has been made now that the toddler has left the room! 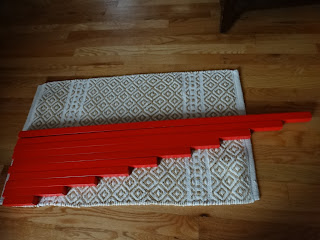 Yay for Mumbs!  After some diligence, she got the red rods in order. 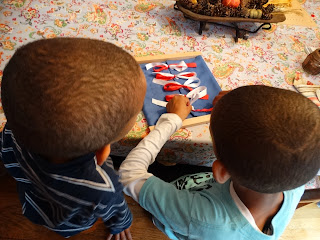 Brotherly love.  Nito reinforces his knowledge of the bow frame while he shows his brother T-Man. 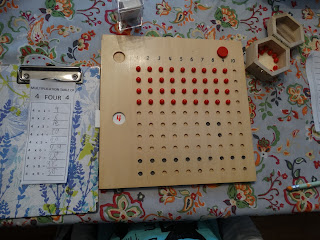 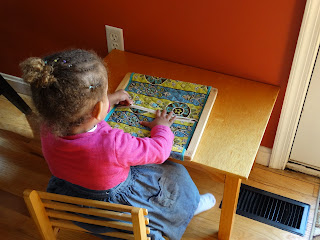 After the bow frame was brought out by her brother, Mumbs felt compelled to do the zipper frame.  Although she mastered that awhile ago! 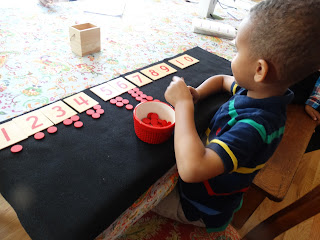 T-Man did some work with the cards and counters.  He's got this down and will be ready to move to the next presentation.

Hmm.....some may ask where Bubs and Kui are.  Where was Bubs today????  That is a great question.  I believe he was working diligently on his spelling and vocabulary along with writing a story about construction workers.  Kui has officially moved on to a different homeschooling curriculum now that she is in 7th grade.  Unfortunately, we do not have a farm school close enough for her to attend.


Posted by Our Lady of Good Counsel at 8:49 PM No comments:

Email ThisBlogThis!Share to TwitterShare to FacebookShare to Pinterest
Labels: General 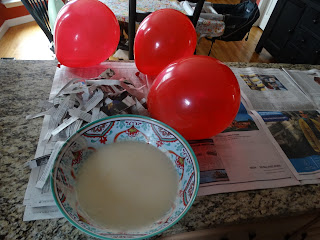 The three boys have been working on their papier mache globe for over a week now.  I got the idea from the book, A Child's Geography: Explore His Earth by Ann Voskamp.  We started this endeavor after T-Man had such interest in the world map.  Of course, the older boys had to join in because it was too messy and fun to not be involved.  And don't forget that it wouldn't "be fair"!.

The setup was pretty straightforward.  It consisted of 3 tasks.

1. Rip strips of newspaper.  How many you ask?  A TON.  Every free moment they had, they were ripping newspapers into strips.  Just a tip, have them do this outside!  You wouldn't believe the mess that newspaper makes from black hands to random pieces of newspaper strewn from one side of the room to the other.  The strips should be about an inch wide and about 6-8 inches long.  Although the length doesn't really matter.

2.  Make the paper mache dough.  Mix one cup flour with one cup water.  Then add 4 cups of boiling water and voila!  A super duper sticky mess.  I propose that you make this in advance because it will need to cool for some time.  The kids can't dip their strips into a boiling hot dough.  Now, I have to admit that this was the first time I have ever made paper mache dough.  It sounded straightforward.  I mean how hard could it really be?  Well.......apparently for me it can be tricky.  My first batch ended up being a clumpy mess once it cooled.  We were still able to maneuver around with it, but I'm pretty sure it is supposed to be clump free.  If anyone has had good luck with it, please leave me a comment below.  I know this won't be our last effort with paper mache.

3.  Blow up your balloons.    The boys did this themselves thankfully.  We did have to end up doing a few extra for the young girls who now wanted them to play with and of course, inevitably, one of the boys popped before we even got started! 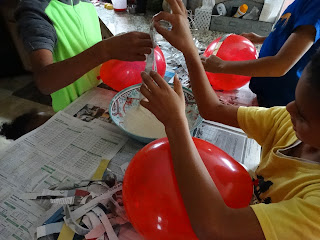 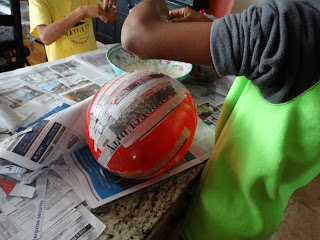 Bubs dominated and found a way to do it one handed. 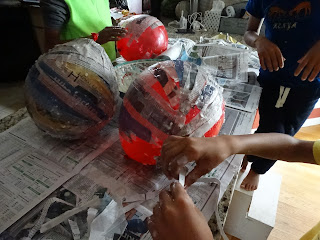 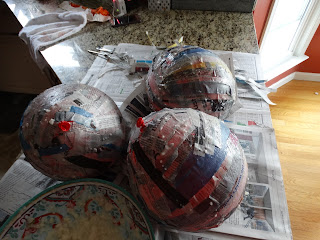 The first layer is complete.  Now it needs to be completely dry before a new coat is added.  The balloons need three coats before they can be painted. 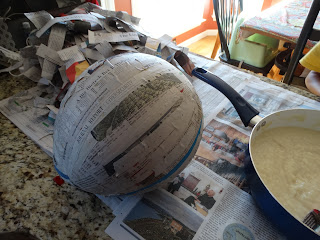 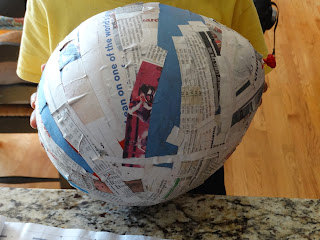 The third coat is finally finished! 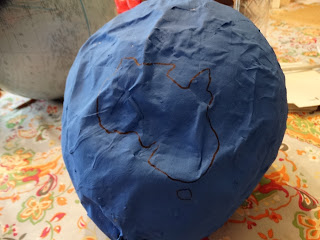 Ok, so by the end of the week (which is how long it took for all of the layers to go on and dry), the balloons had seen better treatment.  Some of the boys decided to use their balloons as soccer balls, weapons, etc. and now they look a bit like a tattered pinata.  This was Nito's balloon.  They painted the entire balloon blue for the oceans.  Then they started drawing the continents.  This was to be Australia. 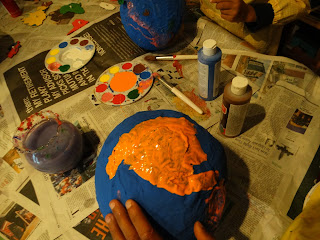 After the outlines were made, they began to paint the globes.  They followed the colors from the original world map puzzle.  (See that presentation here.) 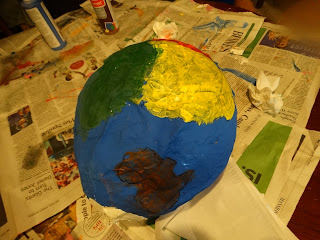 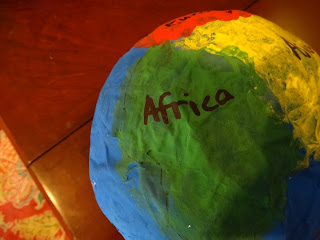 Once the paint dried, they labeled each continent. 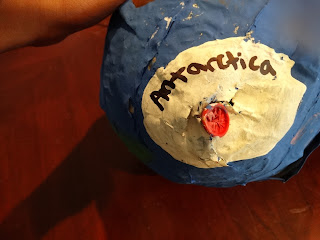 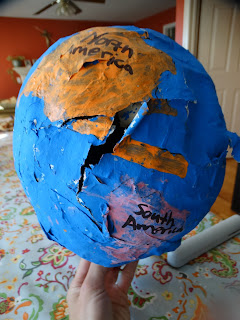 Nito was very proud of his.  I refrained from telling him it looked quite interesting with a big hole in his Earth.  T-Man used his as a soccer ball. Bubs displayed his on the hutch for all to see! Ha.

Good luck to anyone who tries to make a globe.  I hope you have success!

Posted by Our Lady of Good Counsel at 11:22 PM No comments: 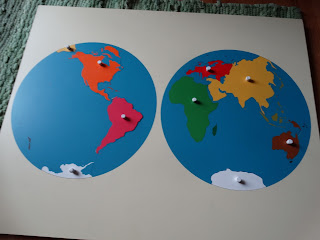 The World Map is always exciting to do with young children.  They see the globe in our classroom everyday, but can not quite fully grasp how large our Earth really is.  T-Man has been working with this for awhile now, but Mumbs happened to join in today and it was very cute. 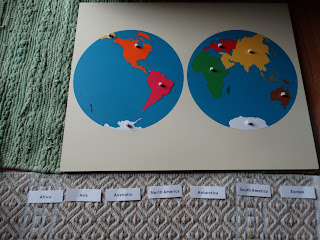 The presentation consists of the child learning the names of the continents and then being able to label them.  However, T-Man can't read yet, so it requires an older child or myself working with him to accurately name the continents. 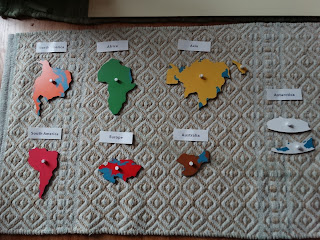 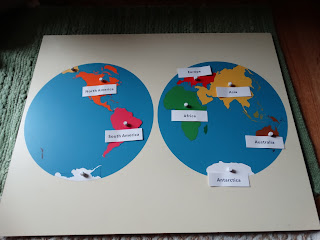 After he labels the continents, he places them back in the puzzle.  Then we do another 2nd period lesson with the names.  He is not quite at the 3rd period lesson.  We will hopefully move to that soon.  It's quite funny though.  He calls Africa, "Kenya".  Hey, at least he knows that Kenya is on that continent!  So, there is clearly some work to be done.  Mumbs is nearby during the presentation so she is absorbing all of it. 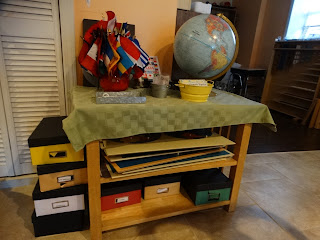 Here is our Geography shelf.  It is a bit sad looking these days.  The colored boxes are the continent boxes (which I will post on another day).  However, some of the labels are ripped off from past crawling babies and it has clearly not been on the priority list to fix them.  The maps are disheveled and prop 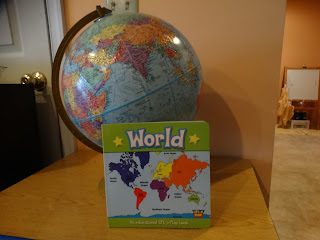 Once the presentation was done, I took T-Man back to the globe to emphasize that the two "hemispheres" or circles that he was seeing on the flat map, were actually round.  Then we read a book with some interesting facts about each continent. 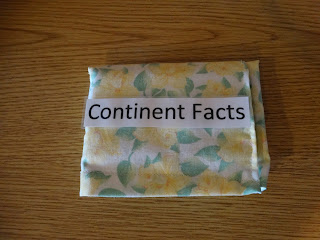 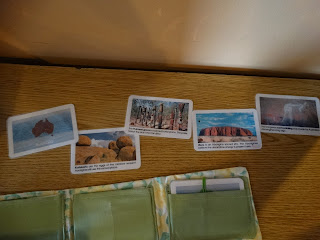 Another material he used was some information on each continent.  It has a few cards for each one with famous landmarks.  I have continent boxes as well, but I usually present those as an extension after the child has done the individual continent map.  It contains food, clothing, musical instruments, animals, etc. from that particular continent.  See that post here.

As an extension and also a fun messy craft, see the link to the post on Making a Globe.

Posted by Our Lady of Good Counsel at 10:46 PM No comments: