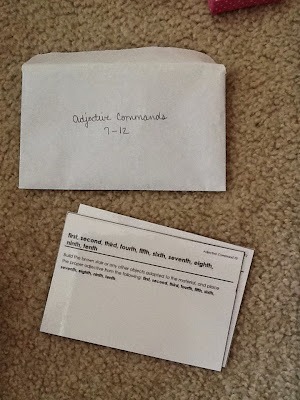 Today we worked with the command cards for the adjective grammar box.  I recently discovered (because I clearly don't have this whole elementary Montessori thing down yet) that Kui should be done with the grammar boxes.  That being said, I cleared them off the shelf and just left the command cards and experiments.  So today we decided to work with those to get a little more practice with examples of adjectives and their meaning.. These command cards provide a great resource for the child to develop a concrete understanding of the definition of a word.  It is a hands on way of learning instead of just using a dictionary.
Yesterday we did sentence analysis which was a great change for her in the language department. So she was also excited to do command cards instead of those tedious filler boxes.  Plus the command cards allow her to be goofy and move around. 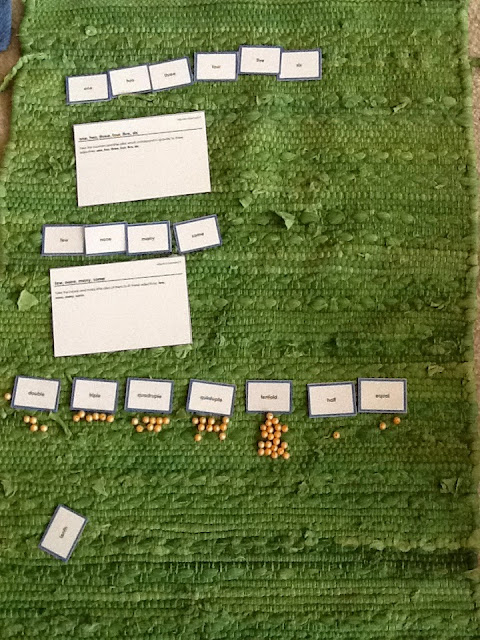 She first dealt with adjectives like: few, none, some, many.  Then followed with: double, triple, quadruple, quintuple, tenfold, half, and equal.  She did have to look up a few of them, but didn't mind since she was getting to use her brother's golden beads!  (Just a note that the pictures can always be enlarged simply by clicking on them.) 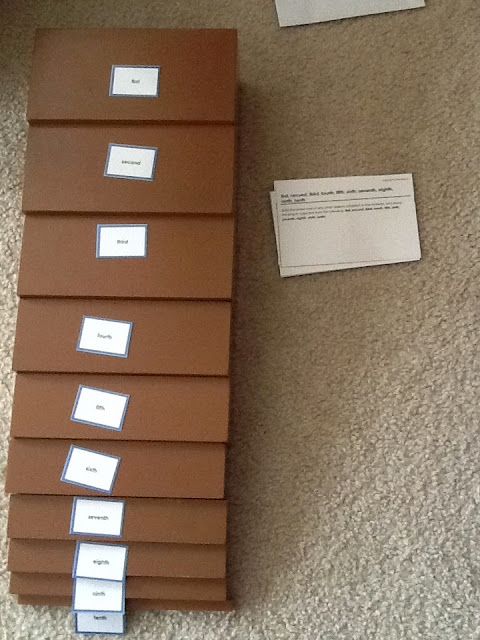 This card dealt with first through tenth.  She was excited again because she was using "primary" materials.  She was acting like a kid in a candy shop with her little giggles.  Nito was not too excited though because he has just begun to use those few sensorial materials (pink tower, brown stairs, etc.) and is clearly in the mindset that they are all his and she shouldn't be using them.  She decided to skip over the other two command cards with first through fifth using the drawers from the geometry cabinet.  She said that was too easy. (Well!) 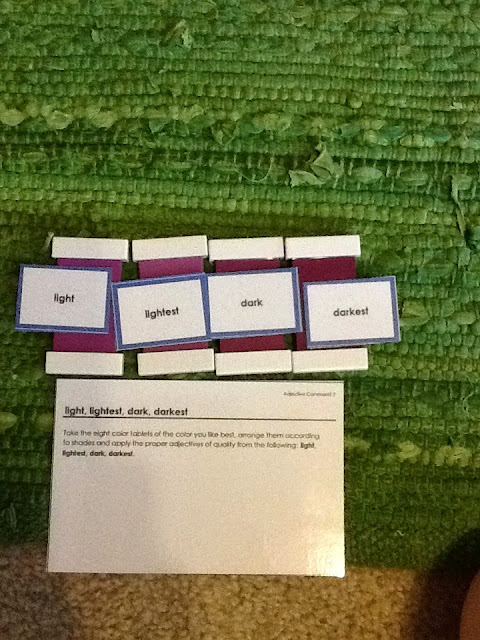 I apologize for the poor picture quality.  Our camera is officially broken and we are waiting patiently (ok not me) for a new one to come in the mail.  My Ipad doesn't do the greatest of jobs with poor lighting.   The color tablets were a great material to use for light, lightest, dark, and darkest.  Bubs wanted to help her with this, but she was adamant that it was her work and he could only watch.
My other three pictures are being stubborn and refuse to turn right side up.  I didn't want to post pictures upside down.  Those pictures dealt with adjectives dealing with heavy, heaviest, thick thickest, soft, and softest.

Kui is now inspired to dust off more of her command cards and experiments from the grammar boxes.  Maybe we can get them finished before the end of the year!


Btw.....my posts are a little sporadic and have no set timing of when I post.  There will probably be a few more coming in the next few weeks as we are wrapping up school and I am having a little more time to post.  As always, thanks for reading and feel free to leave a comment on anything I post.  I would love to hear from you!

Posted by Our Lady of Good Counsel at 2:55 PM