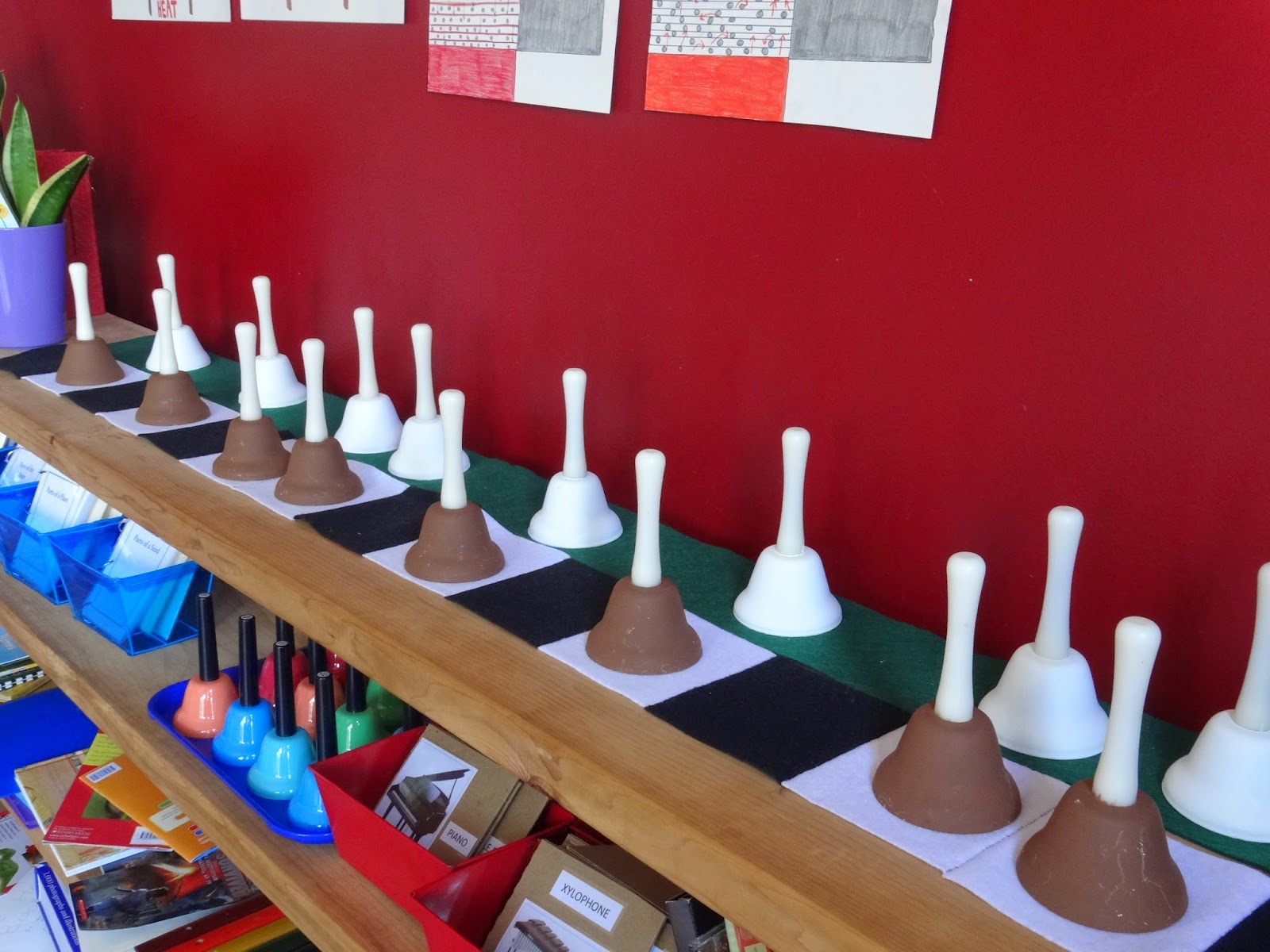 ﻿
Bubs really loves the bells.  However it is quite a pity that I have to shoosh him as often as I do because Anto is sleeping.  Then when he's awake I completely forget.  It's like Bubs and Nito decide to be in an orchestra or on a drum line right when I lay Anto down to sleep.  Let me tell you, Nito's favorite instrument are the cymbals (bam bam bam bam bam as he marches through the classroom!). Oh, but he stays right on the walking on the line tape!

Ok, back to Bubs and the bells.  He has already done the first presentation of matching three bells.  We are now doing one of the first games.  The child is supposed to place one rug in an area of the classroom and another rug somewhere else.  This creates movement for the child and makes it a little bit harder for them to match the correct sounds.  For Bubs' case, he stayed on one rug and I stayed on the other.  He would bring his bell to me when he found the match.  He tends to get discouraged easily so I wanted to make sure it stayed fun and exciting for him. I wanted him to feel like it was "doable".  (I also selfishly wanted him to work with these darn things because they took a long time to make!).  I even had my mom spray paint the bells while I was pregnant to avoid fumes.  It was quite interesting trying to get enough paint to coat the original colors of the bells.  If you want to cut costs, you can find a good tutorial here for making your own bells. I recently got the additional 5 chromatic bells (sharps and flats), but have not painted them yet.  You can see them in the picture at the top of the post.  They are quite colorful! 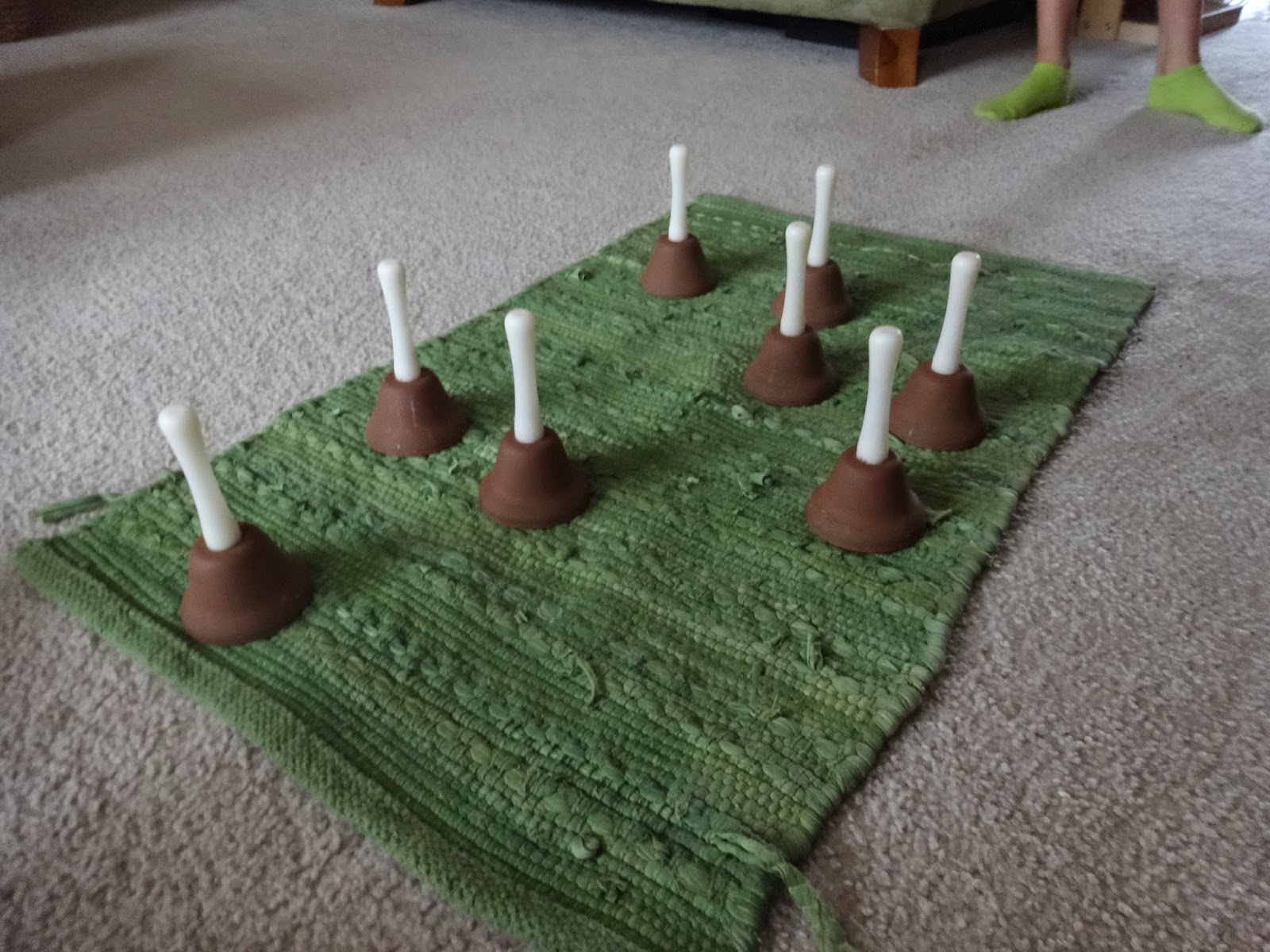 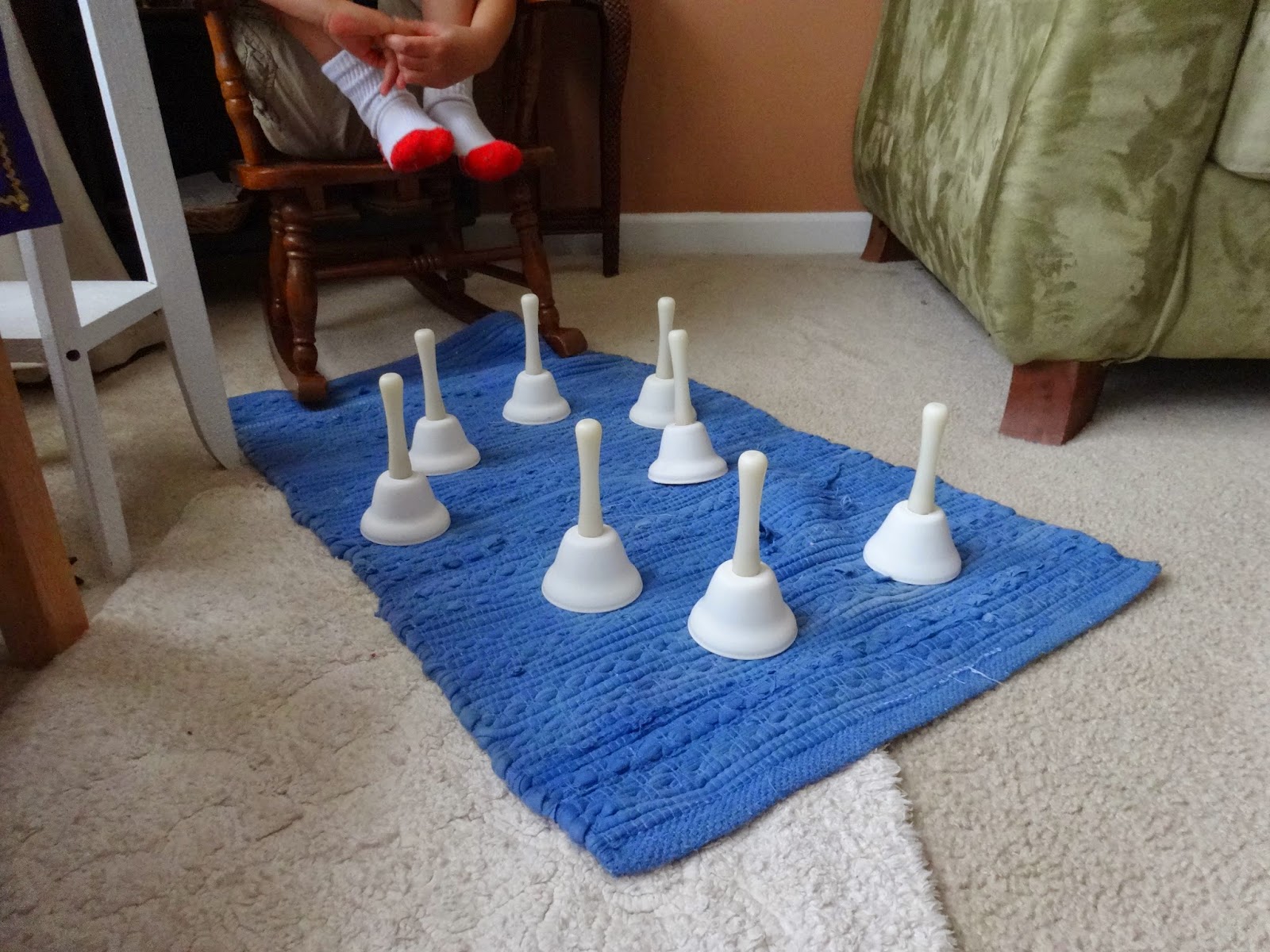 So I would ring one brown bell three times and then Bubs would have to ring each bell until he found the right match.  Once he found the correct match, he would bring it to me and put the matching white and brown bell in the upper left hand side of the work rug.  ﻿ 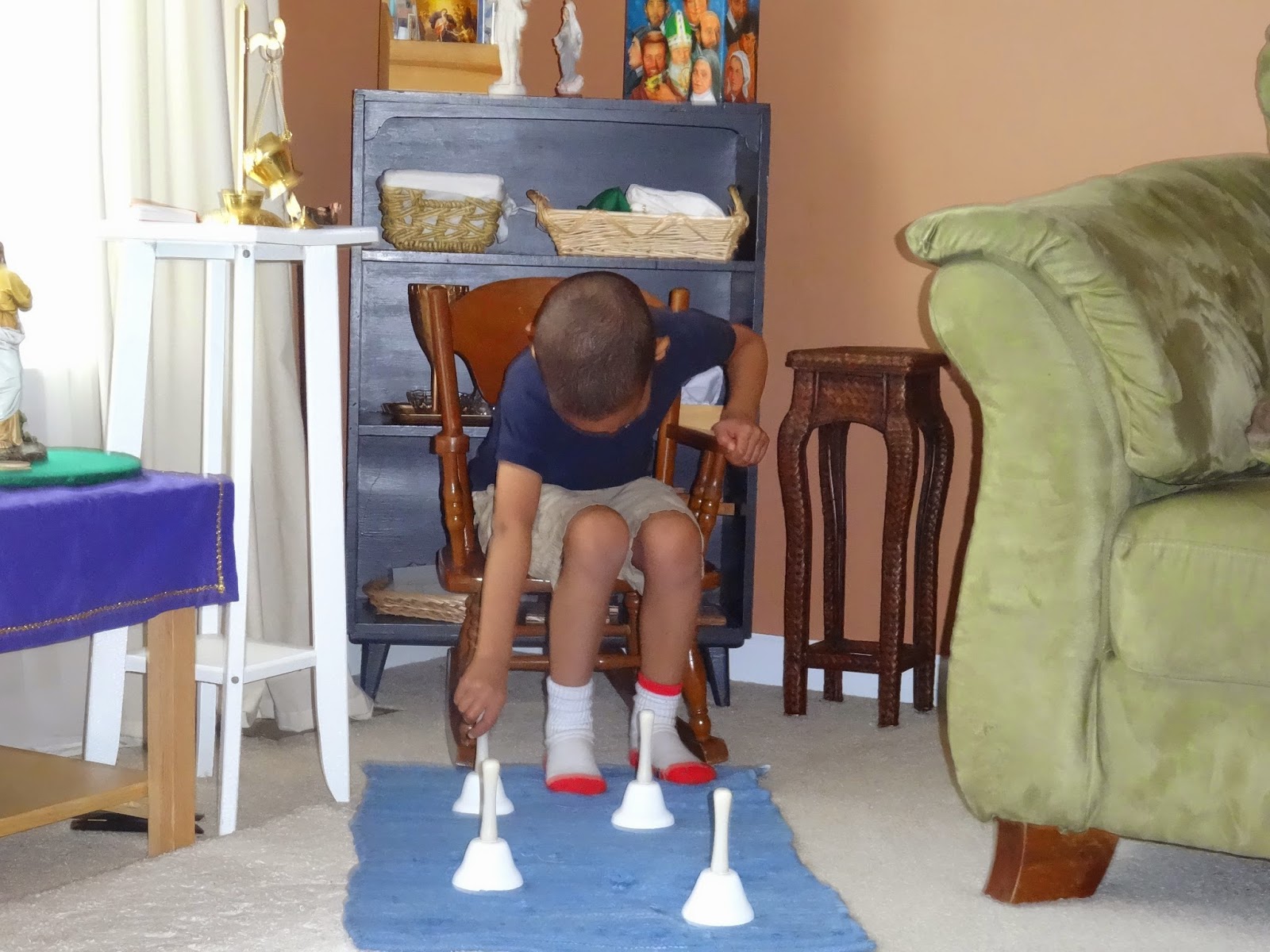 Bubs chose to pull the little rocking chair over to sit in while he was working.  He also wanted to be crammed over in the corner next to the atrium materials.  What are ya gonna do?  He was working right? 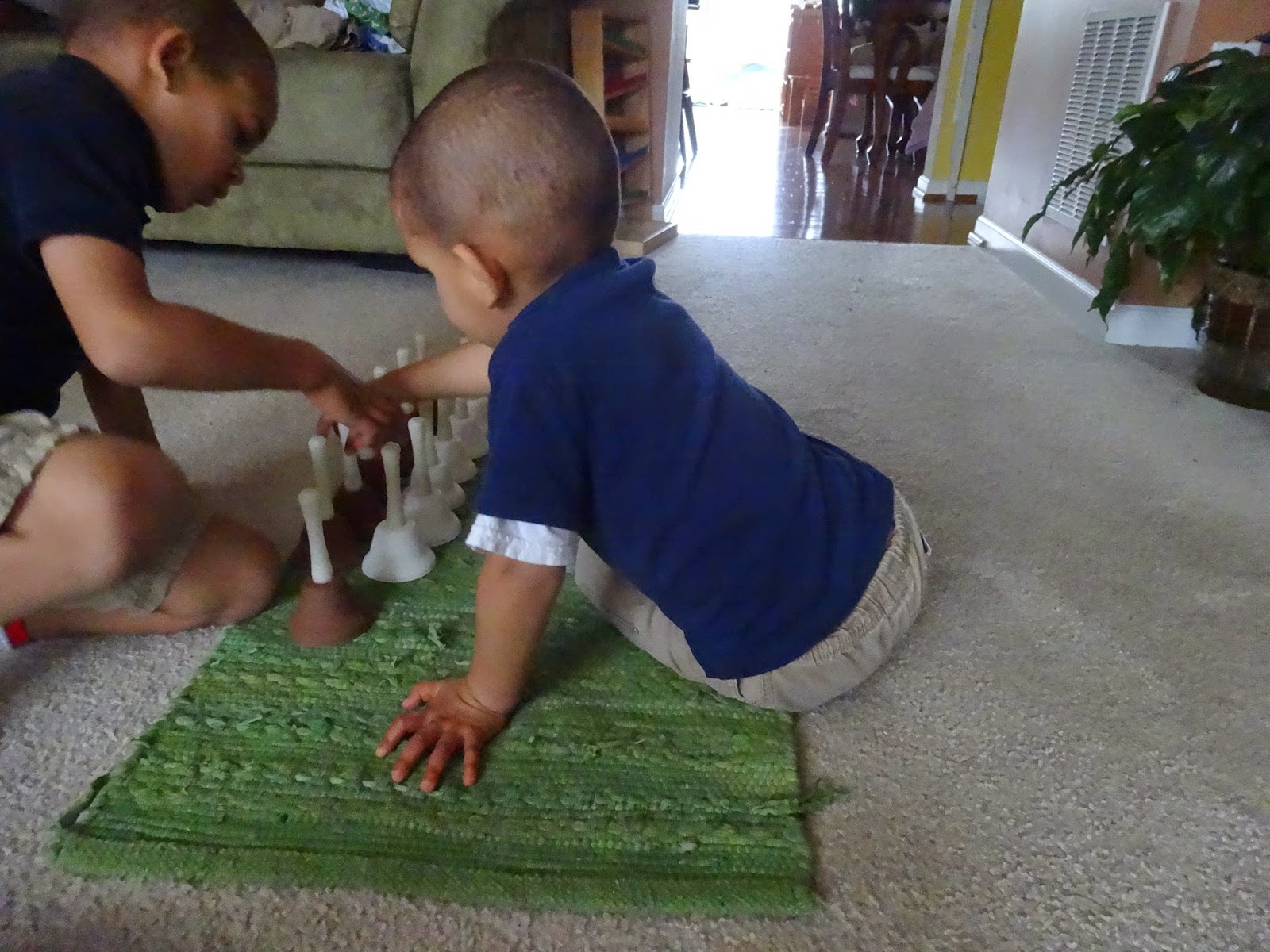 Of course Nito had to be right there helping me ring the bells and line them up.  Bubs was not a fan of him "helping" with his work.  As long as Nito got to help me ring the bells on my rug he was ok and we were able to get through the presentation without a tantrum.  Phew! 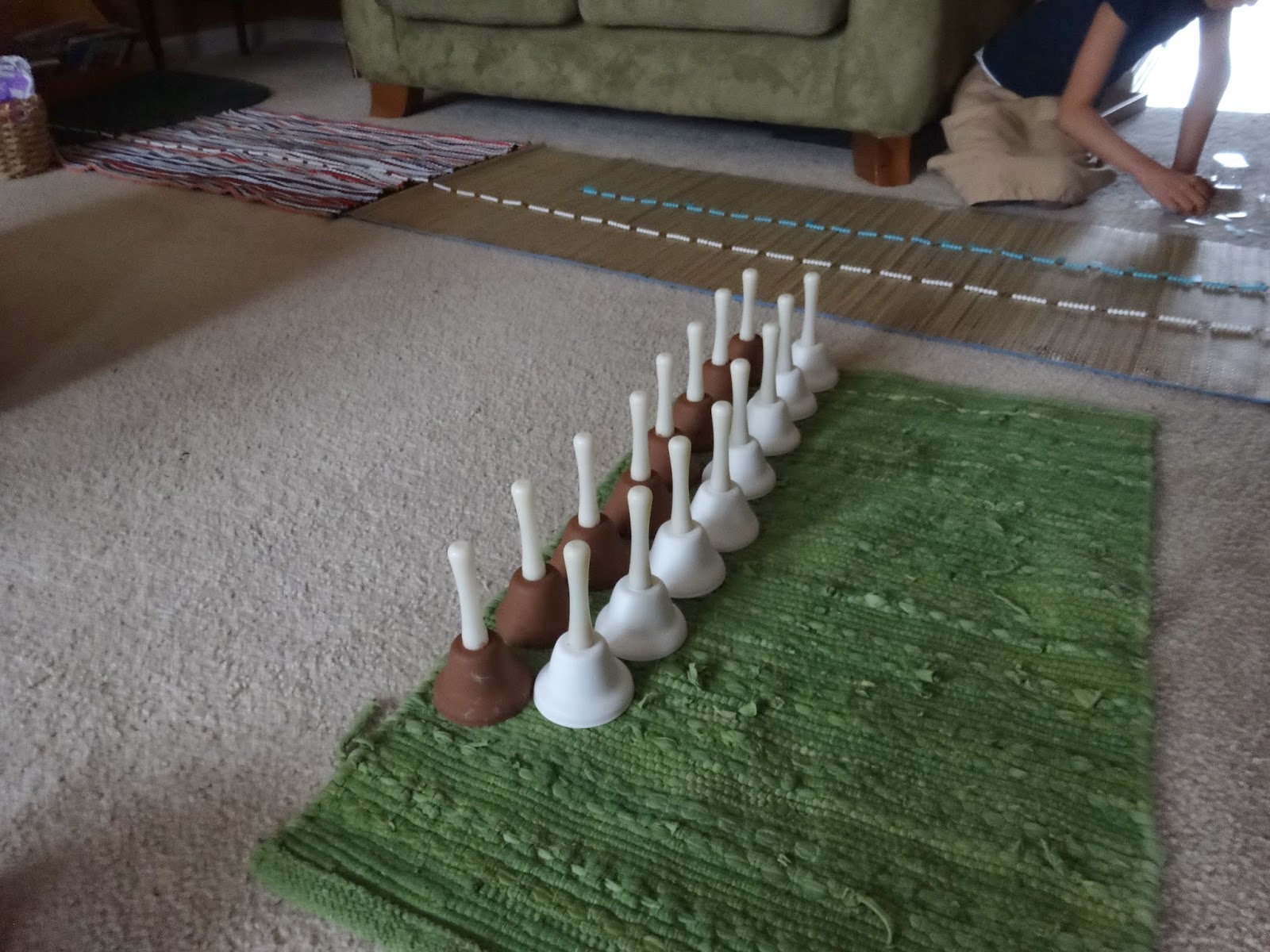 Bubs was very proud once he found all of the matches.  We repeated about three more times before....let me think....oh snack time!

Posted by Our Lady of Good Counsel at 3:13 PM