Global Cuisine - Easter from around the world

Easter dinner was very different this year.  Although we weren't able to follow the traditions that we normally celebrate, we still made the best of our situation and enjoyed our time at home as a family.  Although it was very tough to not be able to go to Mass and receive the Eucharist.
We couldn't find much in the likes of international food dishes for Easter.  The majority was either dessert or bread.  So, we asked the kids what they wanted and we had a smorgasbord.  I took pictures of the truly global dishes.  Some of the other dishes we had was roasted carrots, sweet potato casserole, green salad, and Kenyan cabbage (that counts as normal)! 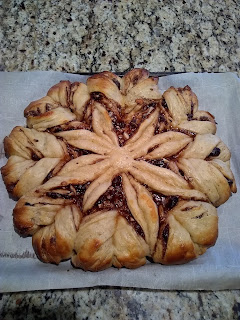 Almond Cinnamon Babka Star Bread
Babka bread is traditionally a Polish Jewish bread.  The word "babka" comes from the Slavic word babcia, which means grandmother.  It is believed that it was named after grandmothers because they are known for making lots of goodies and desserts.  This bread actually turned out beautifully!  It was quite the challenge to figure out how to make the shape, but it was fun to make.  It tastes like a cinnamon roll. 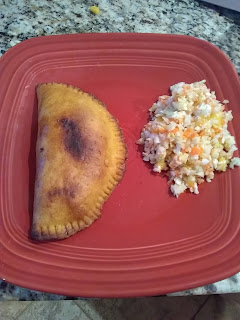 Jamaican Meat Pies and Caribbean Coleslaw
This was a request from the kids.  We gave up meat for Lent so they were very excited to have an empanada filled with delicious meat.  The coleslaw goes great with it and has a nice fresh flavor with the mango that is added. 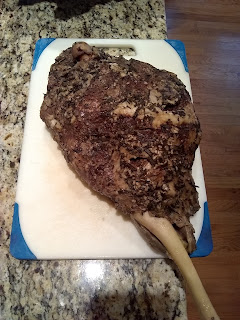 Jamaican Lamb
Apparently we have a Jamaican theme going on!  This was actually given to us from a parishioner from our church who happens to be Jamaican.  She blessed our kids with this huge hunk of meat.  We surprised them with it.  Actually, Belle, our youngest, probably crushed the most out of all the kids.  She loved it! 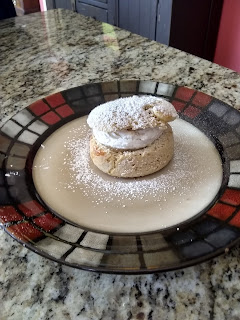 Swedish Semla
Ok.....so Bubs and I made these on Saturday.  They looked fancy on the recipe and I was hopeful that they would be delicious, but apparently cardamom is extremely potent.  We used our mortal and pestle to crush up the cardamom pods and then used our spice grinder to make them into a powder.  Cardamom went into the dough and also into the almond paste for the filling.  The dough wasn't quite right either so they proved to be a bit challenging during the assembly process. 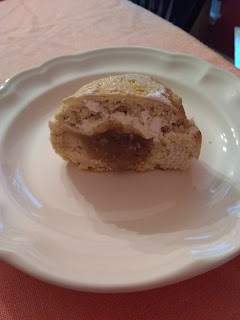 Here is a picture of the semla cut in half.  You can sort of see the almond paste filling.  The whipped cream got smooshed, but the kids still enjoyed them.  I have to say that I tried a small piece and the cardamom was a bit powerful.  However, Bubs said that its a dessert and how can a dessert be bad!!

Stay tuned for our next country.  Belle gets to choose this one, so you never know!  The good thing is that we can have meat now.

I hope everyone has a blessed Easter season!  We are anxiously awaiting baby #7 to arrive in the next week or so.

Posted by Our Lady of Good Counsel at 2:24 PM