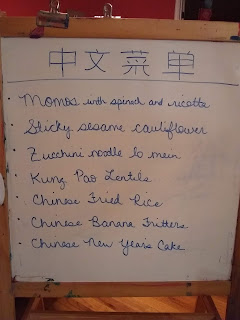 Ok.....so I truly hope not to offend anyone, but I attempted to write "Chinese Menu" in Chinese.  I think it looks pretty good, but I also think my Swahili is pretty good when we go to Kenya and my husband's relatives either laugh or just smile (knowing that I sound like a redneck from Oklahoma)!  DJ stayed busy today and didn't get all of his dishes done.  He had an eggplant and sesame noodle dish that we will probably just have later in the week.  I keep telling him to whittle down his menu, but I guess all of the food looks so good he can't choose wisely!  That being said, this is our last Sunday meal without meat!!!  Hooray, next week is Easter and Lent is over. 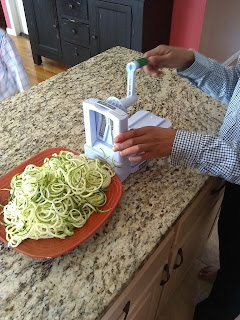 Bubs wanted to get in on the action of the "fun to operate" kitchen gadgets before Mass.  I have to admit that I secretly didn't want him to help because I love turning that crank and watching those beautiful zucchini noodles come out of the other end too! Ha  We helped DJ out while he was away in the morning. 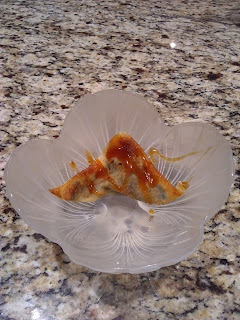 Momos with spinach and ricotta
This picture is a bit hard to tell, but this is essentially a wonton wrapper stuffed with goodness and drizzled with Kung Pao sauce.  There was a lot of kung pao going on in the kitchen today!  Mumbs, who is usually pretty picky, ate about 5 of these. 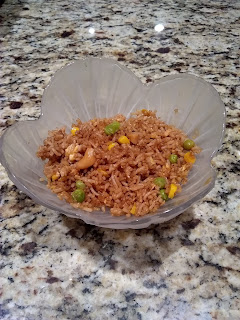 Chinese Fried Rice
Ooohhhh a man after my own heart.  Mama's favorite.  This was Belle's favorite too.  I think she ate three bowls worth.  What is a Chinese meal without it?! 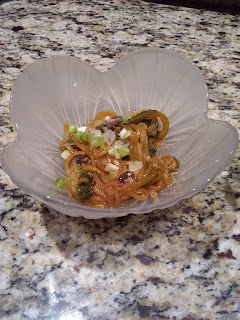 Zucchini noodle lo mein
Many, or shall I dare to say all, of the kids highly dislike mushrooms.  This dish had quite a bit, but the kids were told they had to eat three each.  The backstory of this is that since everyone has been quarantined and DJ has been working from home, there has been a daily basketball game.  DJ vs. the kids.  There is a daily bet and today the kids bet on mushrooms (because they saw them in the fridge).  Unfortunately, DJ crushed them today 15-0.  They have actually never lost so bad since they started playing!  To top it off, they only have to make 5 shots to win and he has to make 15, solo. 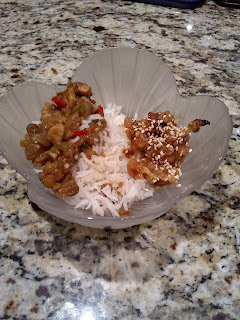 Kung Pao Lentils, White Rice, and Sticky Sesame Cauliflower
These lentils definitely had a kick to them, but were quite tasty.  He added roasted, salted cashews which brought an unexpected crunch element.  The cauliflower was sticky, but sweet and combined nicely with the lentils. 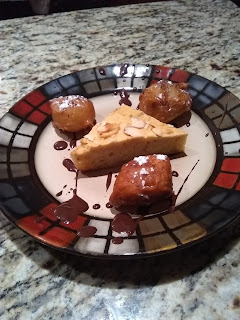 Chinese Banana Fritters and Chinese New Year's Cake
So, for anyone who has any culinary skills whatsoever, you are probably cracking up right now.  We tried so hard for this presentation it ended up looking like we just threw a bunch of chocolate on the plate.  We couldn't get it to drizzle any way we tried so this is what you get.  Globs of chocolate!  On the bright side, the banana fritters were good.  I wasn't sure how they would taste, but the crunchy outside went well with the soft sweet inside.  As for the New Year's Cake, let's just say it was keto friendly.  He used rice flour and added almonds to give it a bit more flavor.  Overall, they both paired nicely with our tea tonight.

Stay tuned for our next Global Cuisine dinner: EASTER from around the world.  Our traditional Easter plans have been changed due to the quarantine, so we are doing our own spin on an Easter menu this year.