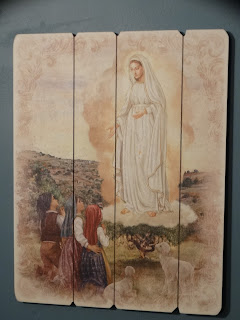 Portugal!
The kids were excited that we were doing Portugal because the Fatima children are from there.  This picture has Our Lady of Fatima and the three children: Lucia, Francisco, and Jacinta.  Hopefully one day, we will be able to visit the city of Fatima.  Until then, let us experience Portugal through the hands of DJ! 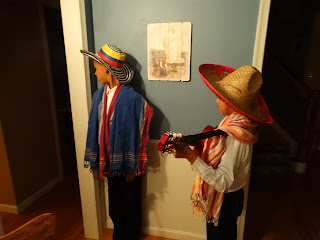 Ok, so I apologize for the pretty lame pictures since I don't show my kids faces.  The girls ended up looking more Jamaican than Portuguese, so I just included a few boys!   Nito has really been playing his guitar more and wanted to include it.  Since we had dinner guests, their song, "Palma, palma, palma" was forgotten!  It was a repeat from when we did Brazil anyway.  Perhaps, if they ever end up doing a song, I will record it and post it to the blog. 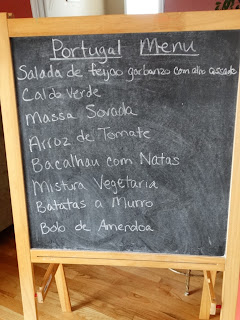 Here is our menu for this week.  I have to say that my hubby is quite ambitious every week.  I wouldn't dream of cooking so many things, but I cook almost everyday so that could be why.  However, it is smart in the sense that I never have to cook on Mondays since we usually have leftovers, even after feeding our army of children. 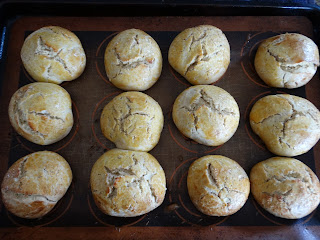 Massa Sovada
My husband knows that I'm a carboholic and always makes a point to get some sort of bread into the menu.  This is a Portuguese sweet bread.  They came out nicely, but I found them a bit dry.  Although, that can easily be resolved with a little butter! 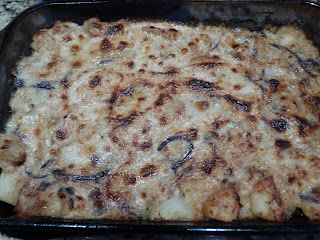 Bacalhau com Natas
I believe this was the most popular dish and there were very little leftovers.  This is salted cod that is baked and mixed with fried onions, potatoes, and other goodness.  We had some friends over for dinner and one of them gave it away that this was fish.  I actually would have tried it on my own thinking it was gooey potatoes.  Now, I have to admit, I was eventually FORCED to try this.  I fell into the peer pressure of the whole table telling me that I had to try it.  Gag!  I am not a fan by any means of fish and I mixed it with every carb on my plate!  I was still traumatized from the weekend before when DJ and I went out for our anniversary. He told me that if I tried a fried oyster that he would get me an order of mozzarella sticks!  If anyone knows me, they know how much I absolutely love mozzarella sticks.  So......I agreed.  Well, when the order came, he cut me off a piece of the fried oyster and black stuff started to ooze out of it!  I said, "What the heck is that?!"  He said just eat it!!!!  I literally almost threw up on my plate.  So, needless to say that I was a bit skeptical to eat this fish. 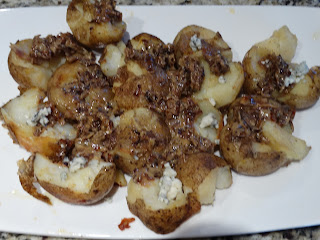 Batatas a Murro
These were a huge hit.  Portuguese smashed potatoes.  They were covered with fried onions and blue cheese.  Now, the moldy cheese could have been switched for a better one, but they were still good nonetheless. 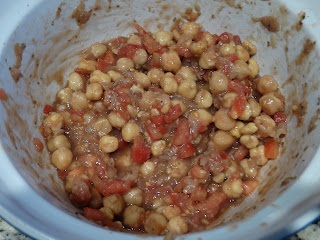 Salada de feijao garbanzo com alino assade
I was very thankful for this fresh element of the dinner.  It is a fresh salad with tomatoes, chickpeas, and fresh herbs.  It was definitely different, but very tasty. 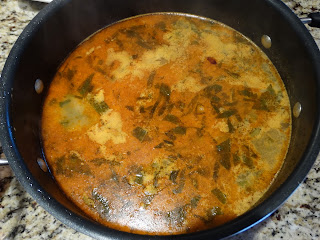 Caldo Verde
Portuguese kale soup.  This soup had great flavor, but I am not a fan of kale, collard greens, or spinach in soup.  It's just weird!  And our darling baby, Belle, calls everything like that a leaf!  She screams and says "Weaf, weaf, weaf" and refuses to eat it.  However, the other children enjoyed it. 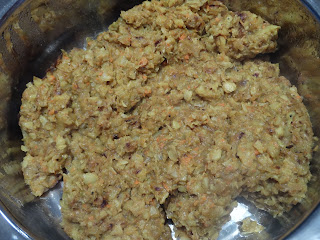 Mistura Vegetariana
Ok.....I just have to say what everyone else is thinking for this picture.  It looks like cat throw up!  DJ said that I need to get better at taking pictures and I agree!  I'm clearly an amateur.  Even though this would not pass the presentation part on Chopped, his flavor was still there.  It is a vegetable hash with cabbage, potatoes, herbs, and olives.  T-Man devoured almost all of the olives before DJ could add them to the dish! 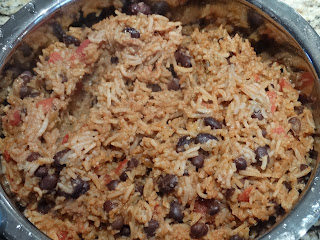 Arroz de Tomate
Portuguese Tomato Rice.  This was a simple nice side dish to compliment the meal.  It is essentially rice and beans with tomatoes. 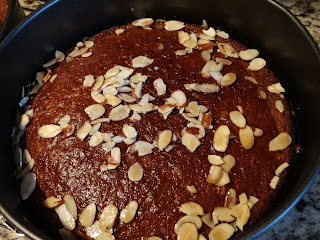 Bolo de Amendoa
OMG!  This was I think one of my favorite desserts.  I think it might actually trump the Italian Pear Cake he made for Italy.  Portugueses Almond Torte.  I recently got him some new spring form pans and he was excited to use them.  I made the syrup for this cake and it smelled so delicious.  Plus, we had it on Sunday so I was able to enjoy this with tea.  Soo good.