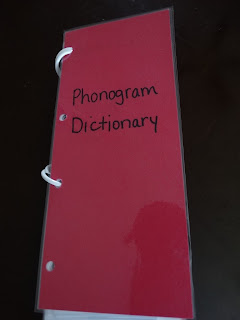 Let me first start by saying that I had never heard of one of these.  But man does it come in handy for the beginner reader.
**Just a disclaimer before I get into the details of the dictionary.  I clearly don't have one of those fancy binding machines which makes a dictionary look like this, but I did the best with the materials I had at home already.  However, I took it upon myself to laminate the dictionary (when no one else did) because I have 4 children who will be using it now or in the future and I wanted it to last.  The downside......well, um, you clearly need to know how to hole punch in a straight line 4 times in a row for about 60-70 pages.  Or otherwise you get the oh so fancy product that you see pictured above.  With only 2 rings, yet 4 holes for rings!  Let's just say that you can't force the rings to go vertical when they are made to go horizontally so the pages turn nicely.  With that being said, it is functional, just not the nicest job of material making that I have done in the past.  But I refuse to reprint, cut, laminate, and cut again and waste another 5 hours or so of my time.
Ok on to the details......I came across this dictionary when I was using the Muriel Dwyer approach to reading rather than the typical Montessori approach.  MyBoysTeacher does a great job comparing the two approaches at her blog What did we do all day.  The last phase of it includes this dictionary.  The child learns the key sounds through the sandpaper letters, sound games, moveable alphabet, and eventually moved on to the reading folders.  Therefore he is very excited about reading, but may not have everything memorized to read independently.  This is where the dictionary comes in.  You teach the child to use it just like a regular dictionary.  It has tabs that help the child find the phonogram that he is looking for.  As the child is reading a book or looking at words that he does not know, then he can go to this dictionary to help him learn the sound of the particular phonogram he is struggling with.  Another way to think of it is the child learned the key sounds with the sandpaper letters or even the double sandpaper letters.  He wasn't introduced to the "other" sounds that a letter could make until he started using the reading folders.  For example, with the sandpaper letters, the child would learn that "c" makes the "c" sound like in cat.  However, the reading folders introduced the "s" sound for the letter "c" like in the word ceiling.  The child may not remember this so he would then use the dictionary to find the key sound.  The picture below shows the first page of the dictionary which is the key for the child.  (Remember the photos will enlarge when clicked on.) 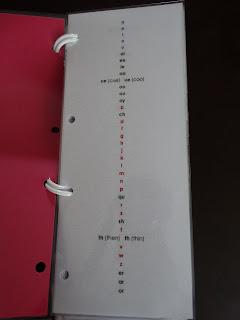 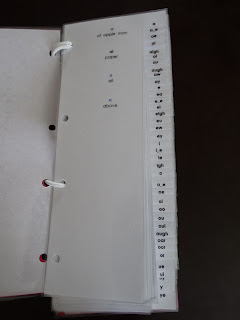 The first sound listed is "a".  The dictionary lists out the four sound options for that letter.  For example, "a" could make the sound "a" for apple, "ai" for paper, "o" for all, or "u" for above.  This helps the child determine which sound is needed to pronounce the word. 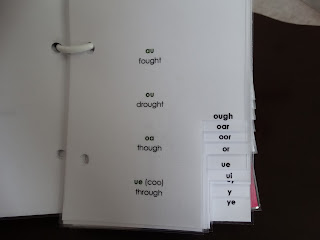 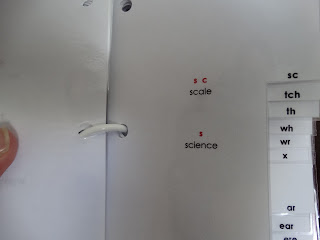 I chose to use a more thorough dictionary and included a second column of tabs which include more sounds just to help the child in the beginning stages.  Here is an example of the "sc" sound.  It can make the "sc" sound as in scale or "sc" can make the "s" sound in science. 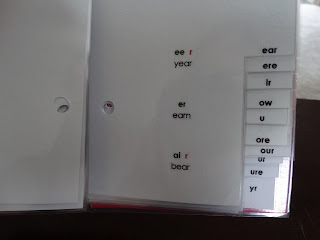 Just another example.  (I love visuals!)
Here is a link to the download I used to make my dictionary.
Posted by Our Lady of Good Counsel at 3:10 PM