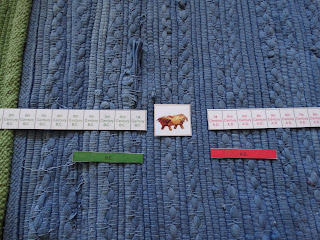 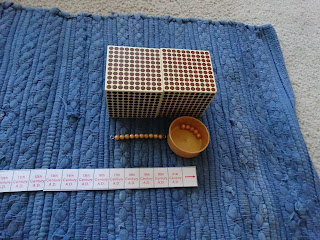 First off, I want to apologize for not posting as often these days.  We are in the midst of packing to move into a new house.  I am super excited, but it is a lot of work.  I will post pictures later in a few months with our new classroom setup.  We will have a separate space for our atrium which will be very nice.  It will be good to have a dedicated space for that.

Kui and I have been talking about the books of the Bible and how it is split up into different sections. For those that are not aware, the Catholic Bible contains 73 books while the Protestant Bible only contain 66 books.  There is a great article here, explaining why 7 books were removed from the Protestant Bible by Martin Luther in the 16th century.  We have discussed the first 5 books (Pentateuch) along with the next 11 books (Historical Books) and are currently talking about the next 5 books which are referred to as the Biblical Novellas.  It is quite interesting to be learning these things along with my child.  Such a great gift and blessing of homeschooling!

I'm sure you are thinking, great, but what does this have to do with B.C. or A.D.?  Well in our Story of the World study for history, we have already touched upon this and what each stands for.  B.C. stands for Before Christ.  B.C.E. is also used and stands for Before Common Era.  (Of course Kui then asks why it doesn't stand for Before Christ Era.  I didn't have the answer.  It was a very good question though.  Please comment if you know why.)  A.D. stands for Anno Domini.  However, most people think it stands for After Death. So she learned this, but we never really went into further detail about how the centuries are calculated and that one era counts up and one era counts down.

So....I made this simple timeline for her so she could visibly see the difference and where the beginning of our calendar began, with Jesus Christ's birth.  I put a picture of the nativity in the center and built the B.C. and A.D. centuries to the left and right of it.  I explained to her that there was a monk named Dionysius Exiguus who was a Roman scholar and theologian who was best known for his creation of a calendar that led to the modern Gregorian calendar.  Then Kui jumped up and ran off!  I was intrigued as to where she was going because I didn't think she had ever heard of this monk (or really even cared)!  Boy was I wrong.  She came back with the book, Story of Clocks and Calendars.  She had found the page with the story of the monk and told me that she recognized that name when she heard me say it.  I was impressed.  I mean, she actually reads those books I put on the shelf?!  This is GREAT. 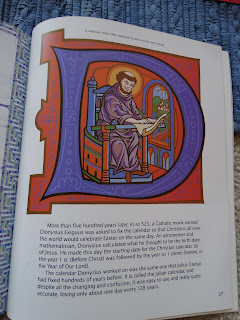 We also reviewed over how long a century is and talked about how B.C. centuries start from a larger number and count down until they reach 1 A.D.  Then the A.D. centuries count up, the numbers get larger.