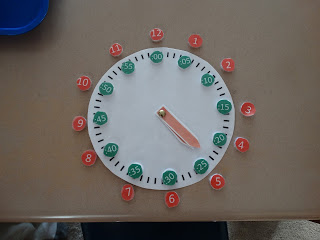 Happy Easter Everyone!  We took this week and part of Holy Week off last week, but I wanted to share something Bubs has been interested in lately.
I had made this clock for Kui a few years ago and it seemed to work perfectly.  I was never a fan of the Judy Clock that most primary classrooms use.  I am not sure why, but I think they just don't look very user friendly. However, I love the idea from this site.  The child is able to manipulate the clock and move around the pieces.  There is also the work of putting the numbers in the correct order which is definitely something that needs to be learned by the child.  I found this out with Bubs.  When I started working with Kui, she already had the basic idea of a clock and the numbers that were on it.  It is not understood that the child will pick up on this automatically, especially if they are only exposed to digital clocks.  I have gotten a digital clock for their rooms just so they can learn to tell time the "old-fashioned" way.  I also purchased these stamps for Bubs to peruse once he has all of the parts of the clock mastered.  These just allow an extension to the clock work and.... who doesn't like stamps, right?!
The picture above shows Bubs working with the clock with a bit of an extension.  He already knows how to label the hours (red circles) correctly starting with 12 at the top.  He then added the minutes (green circles).  He wanted to add the hours around it "just because".  It is helpful for him though when he is making the time that I have asked him to make. 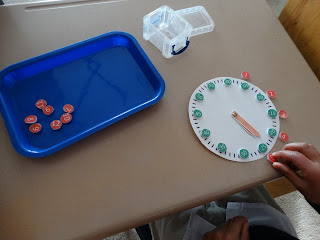 Further extension of this work are the seconds (blue circles -not pictured).  This allows the child to understand the concept that one hour has 60 seconds.  Bubs is not quite there yet, but hopefully soon we will get there along with writing out the times and using the stamp pad.  Shhhhh.....he doesn't know about that yet.  I wouldn't want to rush him through the critical manipulative stage!

Posted by Our Lady of Good Counsel at 9:25 PM