Well, here are a few pictures from a typical school day around Our Lady of Good Counsel.  Don't mind the moving boxes in a few of the pictures.  I tried to not get them in there, but they are all over the house and they prove to be a great barrier for T-man entering the classroom, especially the one with heavy dishes.  However, you can see in the picture below, that someone had moved this great barrier and he had his way with the environment.  His first stop, Nito's chalkboard! 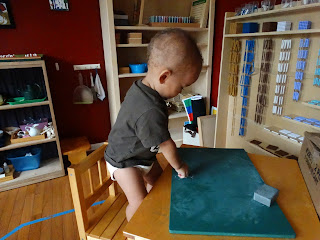 Oh did I forget to mention that he prefers to draw standing up and probably on one foot if he could manage!  This boy has no fear. 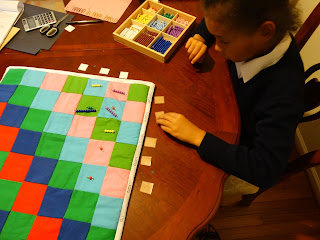 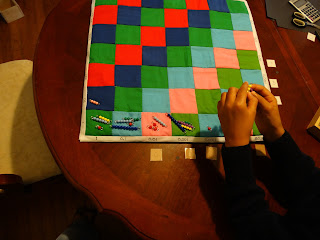 I presented the decimal checkerboard to Kui the other day and she picked it up right away.  It is very similar to the regular checkerboard. 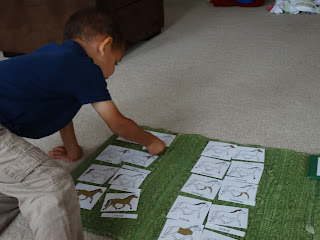 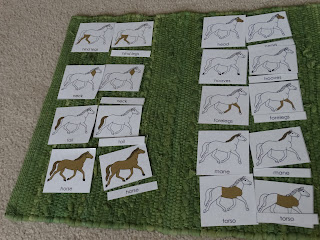 I showed the Zoology booklets to Nito and he really picked up on it quickly.  He did about 4 more and a few more the following day.  I am quite sure that he is ready for more materials, but I am finding a hard time giving him priority over Kui and Bubs at times.  There is just not enough time in the mornings to get to all of them.  Then you throw T-man into the mix, well....I'm not sure how I get anything done! 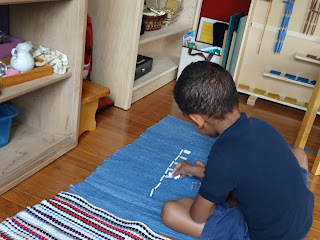 Bubs has zoomed his way through labeling the short chains and I can't quite keep up on the following presentations fast enough.  I am so happy though that he loves numbers so much, unlike his sister.  She is slowly coming along these days, but I hope to keep his interest as long as I can.  I just need to be more diligent in making sure I know what presentation comes next and having the material ready. 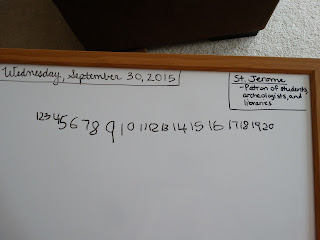 Here is Bubs again with his numbers.  He insists on writing all the way to 20 and has begged me to let him use the marker board.  I gave in and told him that next week he was ready for paper though.  We'll see how that goes and hopefully there isn't a tantrum involved.  Stay tuned!
Posted by Our Lady of Good Counsel at 9:51 PM