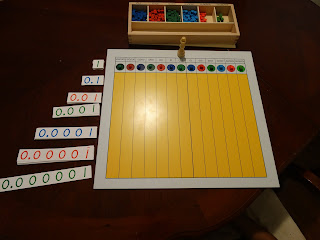 Yay!  We have finally started something official for math this year: DECIMAL FRACTIONS.  I am shocked that I actually have my act together enough for this.  It isn't "easy peasy lemon squeezy" like my daughter goes around saying.  The tricky part to all of this Montessori homeschooling business is that I have to first understand it, figure out how to do it, and then be able to present it to the kiddos in a way that makes sense!  Thanks be to God for You Tube and all of those teachers who like to video themselves doing these presentations.  Just when I think no one in their right mind would video themselves talking about how to read decimal fractions, what do ya know?  There are at least 100,000 videos on the topic.  Go figure! 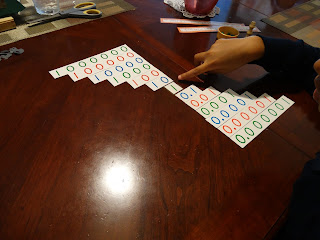 The picture above is the "pinwheel" shape that is created when you write out the whole numbers and decimals with the cards.  I didn't get a picture of it, but if you stick a pin in the middle of the unit, you are able to spin it around, thus showing that everything revolves around the unit.  (Sorry about the glare in the photo.) 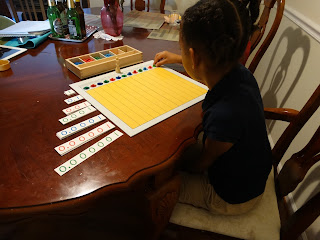 We jumped right into working with the decimal board which Kui really seems to enjoy.  She is using the piece from her chess set to show that the unit is King.  This reminds her to either multiply or divide depending on which way she is moving away from the unit.  If she is moving to the left, she would multiply to get a whole number.  If she is moving to the right, she would divide to get a decimal fraction.  Side note:  Don't mind the tray of beer bottles in the background.  She was working with those earlier to create different pitches with varying amounts of water.  Yes, #herdaddrinks 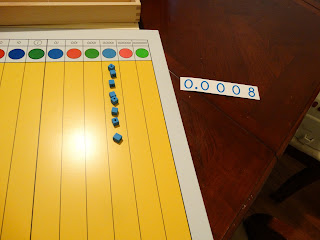 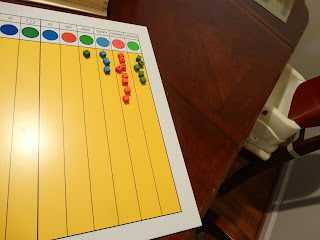 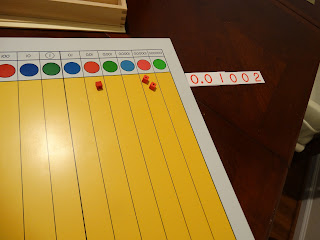 We did quite a few more examples of the simple problems and then moved into problems that involved exchanging.  For example, if she had 12 millionths, she would exchange 10 of those for 1 hundred thousandth and have 2 millionths remain on the board.  So, it is getting used to the idea of moving to the left to exchange quantities (which is a lower amount if you think of it as a whole number).  So far, so good though.  She enjoys it and keeps pulling it off of the shelf.
Stay tuned for adding and subtracting decimal fractions!﻿
﻿
Posted by Our Lady of Good Counsel at 8:55 PM